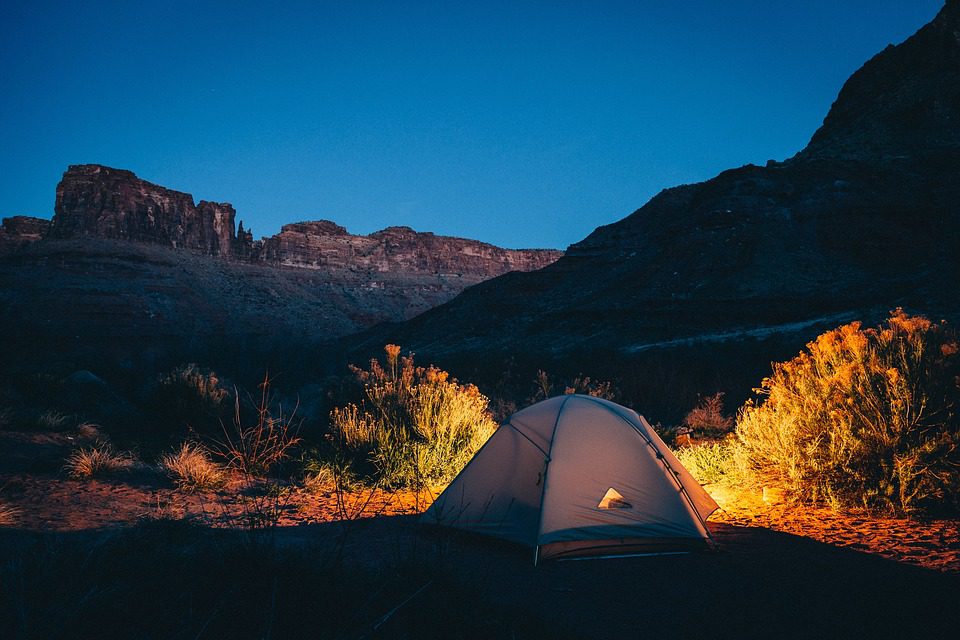 In North America you can find a plethora of super urban cities and settlements and also a host of natural attractions like exciting natural parks, hiking and trekking areas, and some of the best picturesque and thrilling camping sites. No wonder this is why different national parks and other natural settings get so many travelers and tourists from different parts across the world to visit their camping sites.

If you are a nature lover with its inexplicable abundance then North America with its wide superfluity of choices of camping sites is just the place for you. Here we shall make a list of the popular camping sites that you can check out for your upcoming vacation plans.

Apply for your ESTA Authorization here.

Yosemite National Park – The Yosemite National Park is situated near the western Sierra Nevada in the region of central California. It is bounded by the Sierra National Forest on the southeast and by the Stanislaus National Forest on its northwest. The park covers an area that is spread across four counties. It has also been declared to be one of the World Heritage sites. The park is famous for its beautiful waterfalls, exquisite clear streams, interesting granite cliffs, the glorious natural lakes, meadows, mountains, and glaciers. This is a park that contains a wide variety of biological species. Nearly 95% of the park is reserved as untouched wilderness. The vegetation mass can be divided into five major subzones.

Joshua Tree National Park – This is another prominent American national reserve that is again situated near to California. It is situated on the eastern side of Los Angeles and is in the nearby vicinity of the Palm Springs and San Bernardino. The park is well known for its reserve of the Joshua trees that is a native species to the location of Mojave Desert. The park was declared as a national park in the year 1994. The national park is spread across an area of 790,636 acres making it a little bigger than the Rhode Island state. The park is a home to different varieties of flora and fauna that can offer a spectacularly exciting experience.

Glacier National Park – Based on the United States – Canada border, the Glacier national park is one of the most prominent national parks of North America. The park is spread across an area of 1 million acres and encompasses certain sections of the Rocky Mountains. This park was initially inhabited by the native ethnic Americans. Later the region was dominated by the European explorers. The mountains of this park were said to have begun their formation well over 170 millions of years ago. This region is the home to a vast number of native animal and plant species. The moose, grizzly bears, wolverines, mountain goats, and the Canadian lynxes also inhabit these forests and valley lands.

Acadia National Park – This national park of America is situated in the US state of Maine. The park within its sanctity preserves nearly half of the Mount Desert Island along with a number of smaller adjacent islands and also a section of the Schoodic Peninsula. This park was originally called Sieur de Monts. Later it was called the Lafayette National Park in the year 1919. The name Acadia was given finally in the year 1929. A recent survey points out that nearly 3.5 million visitors and travelers came to see the park in the year 2017. The park includes natural elements like the long stretching oceanic coastline, mountains, and woodlands of deciduous and coniferous trees, ponds, lakes, and wetlands.

Big Bend National Park – This famous national park of North America is based in Texas. The park is a significant national feature as is considered to be the biggest projected and reserved area in the region of Chihuahua Desert. This national park is the habitat of more than 1200 species of plants and also harbors more than 450 species and varieties of birds. You can also 75 specifies of animal and a total of 56 reptiles. This park is also a rich geological labyrinth where you can get dinosaur bones, sea fossils and also volcanic dikes. The park runs along the Rio Grande that serves to be a boundary between US and Mexico. This is why visitors to this park have to adhere to a good number of rules.

Click here for everything you need to know about the online travel permit ESTA.

Great Smoky Mountains – The mountain range originates from the North Carolina – Tennessee border and they are a sub-range to the famous and iconic Appalachian Mountains. The locals even refer to the range as ‘Smokies”. The park was established in the year 1934. Millions of tourists come to visit this park every year. This national park is included within the International Biosphere Reserve. The park is the natural habitat of the oldest forests of the Mississippi River Region. This place is also known to have the largest population of black bear and also the most diverse of the salamander.

Arches national park – Located in eastern Utah in North America, this is a national park that is just adjacent in its position to the Colorado River. The park boasts of 2000 and more natural sandstone arches that will also include the famous Delicate Arch. The park is also the home to many other geological formations and other significant resources. The park, in fact, boasts of the highest number of natural arches in the whole world. The park receives less than 10 inches of rainfall every year on an average. The park receives an estimation of 1.8 million tourists every year. It was originally called a national monument. However, the idea was revised and in 1971 it was designated as a national park.

The Adirondack Mountains and park – The Adirondack Mountains and the encircled park (that is encompassed by the mountains) is a massif situated in the northeastern part of New York. The boundaries of the park and the mountains correspond. The mountains give rise to a rough circular dome that is about 260 km in its diameter. This is one of the most interesting sites for camping in North America. The place has a heavy forest that includes a large variety of vegetation, species of trees and different types of animals, birds, and reptiles. There are marshes, swamps, and bogs that contain painted turtles spotted salamanders and a host of other animals.

Olympic National Park – This is a national park in North America that is situated in Washington. The park is based on the famous Olympic peninsula. The park consists of four different geographic regions – the Pacific coastline, the temperate rainforests, the alpine areas and the eastern side forest which is comparatively a drier area. The park within its frame boasts of three different ecosystems that will include the wildflower meadows, the subalpine forests and the rugged Pacific coast. The park has been declared by UNESCO to be an International Biosphere Reserve. In the year 1981, it was also declared to be a World Heritage Site.

Zion National Park – Located near Springdale in the southwestern region of Utah the Zion National Park is one of the most prominent national parks of North America. Zion Canyon is one of the significant features of this park. The walls of this canyon are reddish-tan hued. The park has unique geography being cradled between the Great Basin, The Colorado Plateau, and the Mojave Desert. It has different ecosystems and life zones that contain a wide diversity of animals and plants. There are over 289 types of birds, 75 species of mammals and 32 varieties of reptiles in the park. The different ecosystems of the park consist of the woodlands, the desert, the coniferous forests and the riparian. Within the Zion National Park, you can see beautiful mountains, magnum opus canyons, flowing rivers, and pristine natural arches. It is one of the best places for camping in North America. This is one of the most popular destinations when it comes to attract tourists and travelers from all over the world. This park receives millions of visitors every year.

Badlands National Park – The list of the national parks and natural reserves for camping in North America is never complete if we do not consider the name of Badlands National Park in South Dakota. To be precise it is based in the southwestern part of South Dakota. The park is the homeland of one of the biggest unscathed mixed-grass prairie in the US. It contains eroded buttes and the pinnacles. This is the habitat where one of the most endangered mammals of the world – the black-footed ferret has been reintroduced and is being fostered for a bigger population.

Crater Lake National Park – The Crater Lake is considered to be the fifth oldest national reserves and parks in North America. It is the only national park that is located in the southern region of Oregon. The caldera of Crater Lake is one of the chief attractions of this park. The Mount Mazama which is a destroyed volcano is also one of the attractions of the place. The park is encircled with hills and beautiful forests. It is one of the best places for camping and trekking. The Crater Lake is the second deepest lake in North America and it holds the ninth position for the same parameters when evaluated across the world. The lake has a striking blue color that attracts millions of visitors every year.

The Mount Rainier National Park – This national park is one of the prime attractions of camping in North America. This national park is based in the southeastern region of the Pierce County in Washington. The park was inaugurated and opened to all in the year 1899. It was opened as the fifth national park of the US. The Cascade Range is the highest point in Mount Rainier national park. The park has various attractions like rivers, lakes, waterfalls, and mountains. It is the home to a wide diversity of flora and fauna and it attracts a large gamut of visitors from all over the world every year.

See also: 5 things not to do with an ESTA

The above mentioned national parks are just a few of the national parks and reserves that can be found in different parts of North America. The continent of North America is a large one and it has diverse natural resources and ecosystems throughout its length and breadth. Hence this is a continent where you can find a large variety of camping sites and attractions that can cater to different types of people with different requirements and likings.

Before you think of moving out for a camping trail first make a clear understanding of the type of place that you wish to see. Mind the weather conditions too. This will help you to have a fruitful and a safe camping experience in the place. Additionally, you must also do detailed research about the prohibitions and the other rules and regulations that you need to follow once you are in that place.